The history of the Skinner’s Butte, and really all of the Eugene area, goes back some 30 million years ago (MA) when a warm shallow sea receded from the area and we became permanently above water. During the Miocene Epoch*, beginning 23 MA, intrusive lava  pushed into the marine sediments and laid down many of our prominent features, like Skinner’s Butte, which has withstood time, while other softer rocks and less robust sediments have weathered and disappeared.  Skinner’s Butte stands proud 262′ above the surrounding valley floor, for an absolute elevation of 682′ above sea level*. Just a hill by Western Oregon standards, and not even a big one at that, Skinner’s Butte is still the highest feature near downtown Eugene, and visible from many places.

Kalapuya:  The Willamette Valley has been inhabited for about the last  10,000 years*. Even historically, this was a pedestrian friendly area, with the aboriginal peoples arriving by foot from Asia via the Bering Sea Land Bridge. * Perhaps 10,000 or more Native Americans (Kalapuya Tribes), inhabited the Willamette Valley in the 1820s, but by 1849 nearly all of them were gone, wiped out by viral epidemics, spread by Euro-American explorers.   By 1849, Governor Joseph Lane figured there were just 60 Kalapuya left, and existing in dire circumstances.  The remaining Kalapuya were moved to reservations in the 1850s, and some of their descendants are still there *. 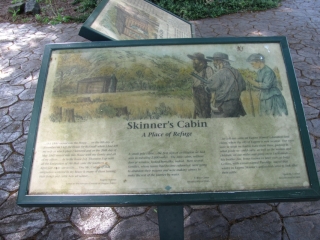 The Pioneers:  One of a handful of initial Euro-American settlers to the Willamette Valley, Eugene Franklin Skinner (1809-1864)* arrived in 1846.  Taking the scenic route, first through California, which Mr. & Mrs. Skinner found not to their liking, they ended up in the Willamette Valley in June, 1846, their journey taking about 13 months.  Eugene Skinner and his other pioneering companions, Elijah Bristow, Captain Felix Scott, and William Dodson all built cabins here*, siting them on public land, and thereby claiming homesteads for themselves and their families*.